Chris is now posting again about his experiences with his new cab.
Go to his site from here
Posted by Truckmann at 1:51 am 3 comments: Links to this post

So, leading on from the burst radiator, I went to my garage the following Monday and I was presented with two options. To take the spare cab and either go to work or sit round my dads house until I got a call, or to take the cab to the service agents myself…..in Luton. The guy at my garage said he’d rung ahead and that they’d see me straight away so I wouldn’t be waiting long so I thought a nice drive up there would be ok. I topped up the radiator and took some spare water and set off up the M1. I was there in no time and handed the keys over and took a seat in the waiting room. That was 11am. At 12.30 I thought that the cab would probably be almost ready so asked the lady behind the counter if she knew how much longer it would be. She said they hadn’t even made a start on it and that she had said to my guy that they wouldn’t be able to look at it until after lunch….at 2 o’clock!!!! Thoroughly flabbergasted, I decided to go for a spot of lunch and set off to find a suitable establishment. There was a café nearby and I ordered a Spaghetti Bolognese and a cup of tea. The food was disgusting, the cutlery had the previous diners leftovers stuck to it and there were a couple of chavvy girls in there with unruly kids that were adding to my slowly rising anger. I paid up and went for a long walk and arrived back at the garage at 4pm to find that they were still a good 30 minutes away from completing the job. Still, I always say, “you live and learn” and in future I’ll be taking the spare cab and letting the garage staff bring my cab to these places. What gets me is that they have a service agent close by but there’s obviously issues there which stop them using it. Anyhoo, the cab is now ok and hopefully I won’t have anymore radiator problems although, if some of the comments on the last post are anything to go by I’ll still be needing a few more rads yet.

A couple of days later Chris and me were eating down at the Royal Oak when we were approached by a lady who was recruiting cabbies to star in a commercial for Heinz Ketchup. She said we’d get paid a grand each if chosen for a day and a half of filming. We both signed up but only I got a call-back a few days later to go to a casting studio in the West End. I had to sit round a table with four other cabbies and we each had to tell a story whilst drinking tea and pouring ketchup (from an empty bottle) on an imaginary meal. This was all watched and filmed by representatives from Heinz and at the end of it we were told to wait for a telephone call if we’d been selected. I’m still waiting so I think it’s safe to say I didn’t get the part.

Whilst sitting on the taxi rank outside the Cumberland Hotel recently a car pulled up along side me and asked me to lead him to Holborn Viaduct and he would follow me and pay me when we arrive. I have done this type of job in the past but once or twice, whilst nearing the destination, the following car has mysteriously disappeared leaving me out of pocket so unless there is someone who can ride with me while the car follows I don’t do this type of job anymore and refusal often pisses the driver off which in this case resulted in me being called a few choice names.

That same day I was flagged by a young guy who was, by requesting to be taken to Soho, looking to get laid. I told him he could get laid in any part of town by simply going to a phone box and taking one of the many cards providing all sorts of personal services. We were at Marylebone Station and I stopped at the first phone box I came across. He got out and returned with a few cards and settled for one with a picture of a very buxom blonde. I called the number and was informed of the starting price (£40) and the address, which was just off Baker Street. Not having done this sort of thing before, the young man looked scared out of his wits, so I rang the doorbell for him and ushered him up the stairs to be met by the Madam. I assured him it would be fine and left him in her hands and wished him luck.

Sunday the 22nd of March was the day reality show and Big Brother contestant 27 year old Jade Goody died after a short battle with cervical cancer. Although I wasn’t a fan it was a terrible thing to happen to someone so young and with everything to live for and my condolences go out to all her family, friends and fans.

I got a call from my son asking how to get to Hammersmith as his normal route was blocked by road closures. I was out and about myself that morning after waking early so directed him around the closures. I then picked up a fare in Kings Road and started heading towards Paddington. Forgetting that my son had already told me of the closures I opted to get to Paddington via the west cross route and the Westway. Big mistake. The Paddington slip road was closed so all the traffic was now forced over the Marylebone flyover and was backed up as far as the closed slip road. This is when she piped up. I was called a "con man", a "joke", I was told I’m “not on” and that she wasn’t paying for “this”, and all in all she wasn’t a very happy camper. On top of all that she was about to miss her train. She was trapped on the down slope approaching the flyover with no way of getting off. But she did. She paid me the meter and got out and started stomping off down the slope of the Westway until she was able to step over a small separator and flag another cab in Harrow Road while I just sat in the traffic and looked on. She probably bent his ear about me and what a crap cabbie I am. I love this job.

The hot news this week is that Chris has got himself a brand new cab. He traded in his five year old TXII and collected his brand new Mercedes Vito Taxi from KPM’s on Tuesday. He had a few things to do straight after collecting it and then drove round to my house to show me it. Obviously, as a brand new cab, it looked really nice inside and out but we sat there picking faults with it that would eventually wind us up during the course of our shift. Things we thought would prove a problem were that the taxi has to be in “park” to open the doors. Another major concern is that there are no openable windows just the side ones that open outwards a few inches. Most people like a blast of fresh air every now and then but now have to rely on the AC to do that. If anyone feels sick, like the guy in my last post, then you’re in trouble as there may be no time to prevent it from going all over the inside by the time you have to pull up, put it in park and then open the doors electrically which takes a bit longer than a normal door. In order for the taxi to pass the turning circle test the vehicle is fitted with rear wheel steering. Chris demonstrated this to me in my street and then drove off to work. About five minutes later he rang to say that one of the rear wheels hadn’t returned to its normal position and that he was weaving all over the road causing other motorists to honk the horn at him. Not bad going for a cab only a few hours old. I drove over to where he was and sat with him whilst the mechanic came out to him. He brought with him a car battery and connected it to the motor on the faulty wheel. This pulled the wheel straight and Chris was able to continue his shift with the rear wheel steering disabled until he could get it checked out properly. He has now had this done and is slowly but surely getting the hang of the cab. His only concern now is taking a left turn through the six foot six on Albert Bridge without scraping the much wider cab on the posts. As far as I know he hasn’t done it yet but tonight could be the night. Watch this space. 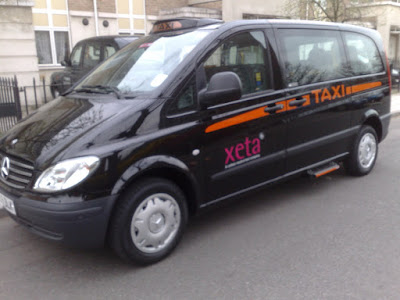 Chris's new cab in front of mine.

Posted by Truckmann at 4:05 pm 12 comments: Links to this post